‘End Of Days’ Prophecy Allegedly Fulfuilled After First Red Heifer In 2,000 Years Is Born In Israel 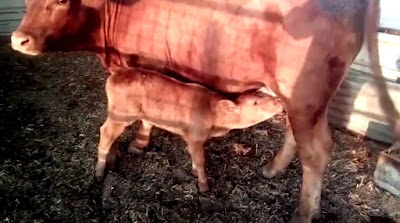 The Temple Institute, a religious organization dedicated to “every aspect of the Holy Temple of Jerusalem”, recently announced the birth of a completely red heifer in the Holy Land – the first one in the last 2,000 years – which is an essential element of a biblical prophecy that theologians believe will bring about the second coming of Jesus and Judgement Day.

According to the Hebrew Bible, the events leading up to the apocalypse should play out like this: Jews would return to Israel after 2,000 years – the Holy Temple would be rebuilt – billions of people would perish during seven years of natural disasters – the antichrist would rise and rule the world – the battle of Armageddon would commence somewhere near Israel – Jesus would return to defeat Satan’s armies and then preside over Judgment Day. The Jewish people may have returned to Israel, but in order for this prophecy to move forward, a perfectly red heifer is needed.

The red heifer is mentioned in Numbers 19:2: “Speak unto the children of Israel, that they bring thee a red heifer without spot, wherein is no blemish and upon which never came a yoke”. And even though a perfectly red heifer is considered a biological anomaly, many in Israel and abroad have been working hard to deliver it. Four years ago, we wrote about Clyde Lott, a revivalist reverend from Mississippi, who has been shipping red cows to Israel in a bizarre attempt to speed up the end of the world. However, conditions for a heifer to be considered viable are incredibly strict.

As we wrote in a previous article, for red heifer to be considered worthy of biblical status, it “must be entirely of a uniform color (there are a series of tests by the rabbis to ensure this), and its hair must be absolutely straight (to ensure that it has not previously been yoked). To be deemed worthy, a red heifer must not have more than three white or black hairs on its body.”

Well, The Temple Institute recently posted a video of a red heifer on YouTube, claiming that on August 28, 2018, “a perfectly red heifer was born in the land of Israel”. The animal has apparently undergone careful examination by rabbinical experts who have so far deemed it worthy as a candidate for the red heifer described in the Bible. However that may change as the heifer grows, so it will be monitored closely.

“It will be examined again in three months time to determine whether it continues to possess the necessary qualifications for the red heifer, a necessary prerequisite for the renewal of the Divine service in the Holy Temple,” the institute announced. “The rabbinical experts who conducted the examination stress that the heifer, while currently bearing the required qualifications could, at any time in the future, become disqualified through natural causes, and therefore the heifer will be periodically reexamined.”

Rabbi Chain Richman, director of The Temple Institute, believes the time is ripe to build the Third Temple, following the birth of the red heifer, which will bring about the “the rapture”, where all Christian believers (living and dead) will rise into the sky and join Christ, while non-believers suffer never-ending punishment in hell.

Interestingly, The Temple Institute worked closely with Clyde Lott for many decades, so maybe he had a role to play in the birth of this rare red heifer.

Posted by Abraham Israel I at 8:45 PM