Can Third Temple be built without destroying Dome of the Rock?

A new Jewish interfaith initiative launched last week argues building the Third Jewish Temple in Jerusalem would not necessitate the destruction of the Dome of the Rock. 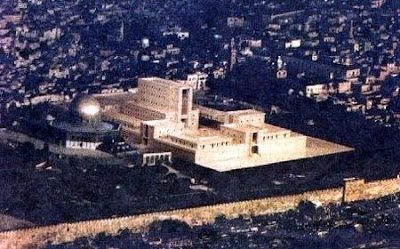 This is an artist's impression of the future
(third) Jewish temple. Notice that the temple
is in perfect alignment with the eastern gate.

"This vision of religious shrines in peaceful proximity can transform the Temple Mount from a place of contention to its original sacred role as a place of worship shared by Jews, Muslims and Christians," said Yoav Frankel, director of the initiative.

The Interfaith Encounter Association at the Mishkenot Sha'ananim's Konrad Adenauer Conference Center in Jerusalem is sponsoring the program, which includes interfaith study and other educational projects.

According to Islamic tradition, the Dome of the Rock, built in 691, marks the spot where Muhammed ascended to Heaven.

But according to Jewish tradition, Mount Moriah, now under the Dome of the Rock, is where the Temple's Holy of Holies was situated.

Until now Jewish tradition has assumed that destruction of the Dome of the Rock was a precondition for the building of the third and last Temple.

However, in an article that appeared in 2007 in Tehumin, an influential journal of Jewish law, Frankel, a young scholar, presented a different option.

His main argument is that Jewish doctrine regarding the rebuilding of the Temple emphasizes the role of a prophet.

This prophet would have extraordinary authority, including the discretion to specify the Temple's precise location, regardless of any diverging Jewish traditions.

Frankel considers the scenario of a holy revelation given to an authentic prophet that the Temple be rebuilt on the current or an extended Temple Mount in peaceful proximity to the dome and other houses of prayer such as the Aksa Mosque and nearby Christian shrines.

However, both Muslims and Jews have expressed opposition to the initiative.

Sheikh Abdulla Nimar Darwish, founder of the Islamic Movement in Israel, said it was pointless to talk about what would happen when the mahdi, the Muslim equivalent of the messiah, would reveal himself.

"Why are we taking upon ourselves the responsibility to decide such things?" Darwish said in a telephone interview with The Jerusalem Post. "Even Jews believe that it is prohibited to rebuild the Temple until the messiah comes. So what is there to talk about.

"The mahdi will decide whether or not to rebuild the Temple. If he decides that it should be rebuilt, I will go out to the Temple Mount and help carry the rocks."

Darwish warned against any attempt to rebuild the Temple before the coming of the mahdi.

"As long as there is a Muslim alive, no Jewish Temple will be built on Al-Haram Al-Sharif [the Temple Mount]. The status quo must be maintained, otherwise there will be bloodshed."

In contrast, Baruch Ben-Yosef, chairman of the Movement to Restore the Temple, made it clear that the Temple had to be built where the Dome of the Rock presently stands.

"Anybody who says anything else simply does not know what he is talking about," he said. "A prophet does not have the power to change the law which explicitly states the location of the Temple."

Ben-Yosef also rejected the idea that rebuilding of the Temple had to be done by a prophet.

"All you need is a Sanhedrin," he said.

Mainstream Orthodox rabbis have opposed attempts to rebuild the Temple since the Mount came under Israeli control in 1967.

The Chief Rabbinate of Israel even issued a decree prohibiting Jews from entering the area due to ritual purity issues.

However, several grassroots organizations such as the Movement to Restore the Temple, and maverick rabbis, including Rabbi Israel Ariel, head of the capital's Temple Institute and a leading member of the revived Sanhedrin led by Rabbi Adin Steinsaltz, have called to take steps to renew the sacrifices on the Temple Mount and rebuild the Temple.