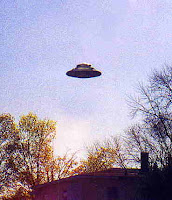 A record number of UFOs are expected to be spotted this year in Britain after hundreds of sightings were reported in the first six months of 2009.
Strange floating orbs and unexplained hovering objects have all been recorded and reported to the Ministry of Defense in the last six months.

A total of 231 sightings of unidentified flying objects have been passed on to the MoD so far this year, according to The Sun.

The number of sightings is thought to have increased because many more people now carry digital cameras and are able to photograph strange objects.

Nick Pope, who used to run the Government's UFO project and is considered a leading authority on UFOs, told The Sun: "We are now on track for a record year.

"I thought the number of UFOs reported last year was high, but we now know they are being reported in increasing numbers."

Last year, the MoD released files detailing strange and unexplained sightings reported to them between 1986 and 1992.

In one instance, an Alitalia flight coming into land at Heathrow Airport reported a near miss with a UFO, which the pilot described as "similar to a missile - light brown or fawn, about three meters in length but without any exhaust flame''.

In the files, released by the National Archive, the military admitted the sighting in April 1991 could not be explained, having ruled out a British or American missile.

It concluded: "In the absence of any clear evidence which could identify the object, it is our intention to treat this sighting like that of any other Unidentified Flying Object.''

Two further near misses were reported in the summer of 1991, when one aircraft flying in to Gatwick Airport reported a "wingless projectile'' passing the left side of the plane, and another flight leaving Gatwick spotted a "small lozenge-shaped object'' speeding past the cockpit.

The files also went into detail about a US Air Force pilot who claims he was ordered to shoot down a UFO flying over southern England in 1957, and was later ordered never to speak about the incident.

Posted by Abraham Israel I at 8:47 PM