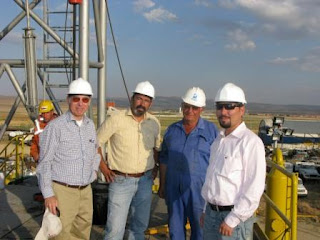 Israel's unexpected gas bonanza gets bigger
www.worldtribune.com
TEL AVIV — Israel has reported an expanded offshore natural gas reserve.
A prime contractor in a consortium to search and develop gas reserves reported that Israel's Tamar well contained 16 percent more energy than in previous estimates.
Noble Energy said reserves at Tamar were estimated at 207 billion cubic meters rather than 178 billion cubic meters.
"There is already enough Israeli-made natural gas to provide the country's needs for years to come, and we plan to determinedly seek out additional reserves in our many licenses along the coast of Israel," the consortium said in a statement on Aug. 11.
Delek Group president Yitzhak Tshuva, a member of the consortium, said Tamar could fulfill Israel's gas requirements for up to the next 25 years.
Other consortium members were identified as Isramco Negev 2 with 28.75 percent, Avner Oil Exploration with 15.625 percent and Dor Gas Exploration with four percent.