White Horse in the Book of Revelation

The White Horse and Rider

The ultimate face-off between the Lamb of God and Satan is the most breathtaking truth in the Book of Revelation. But, first a six thousand year old scroll must be understood. “And I saw in the right hand of him that sat on the throne a book written within and on the backside, sealed with seven seals” (Revelation 5:1). Apparently, our Heavenly Father commissioned this scroll to be written just as soon as Satan stole the legal deed to the beautiful world that Adam and Eve had inherited. This scroll was never seen by mortal man until John saw it in his vision. The Father held it as a strong angel sought a Worthy Redeemer who had earned the legal right to open its content.
Nowhere in God’s entire universe was there a being or creature kin to the divine person of God. The great host of angels must have searched every nook and cranny in the heavens, on the earth, and under the earth. By divine revelation, John was either told or made to understand that this book contained the hope of humankind. Without this great scroll in the Father’s hand being fulfilled, this unclean universe was destined to continue downward. Someone had to open this book and take back what the devil stole. In this six thousand year old document were the title deed and the divine process to uproot the usurper. The Father’s plan and purpose was recorded; but, the first of kin to God Himself had to unseal the plan.
John was weeping in soul-rending disappointment. We would think that John already knew that there was an answer; but, it had been held back from him. It was an unfolding drama. He was still in the flesh even though he was caught up in the Spirit. But, the Elders at the scene were glorified saints and now possessed the wisdom of the ages. “And one of the elders saith unto me, Weep not: behold, the Lion of the tribe of Juda, the Root of David, hath prevailed to open the book, and to loose the seven seals thereof” (Revelation 5:5). This is one of the most revealing manifestations of the victory of the cross in Holy Scripture. His death was the redemption and reclaiming of paradise lost.
When the Son of God said, “It is finished,” He literally ripped a stolen and emaciated world out of Satan’s possession. That victory could not be claimed until the Gospel had its day of redeeming souls. But, that day is now at hand in this vision; and we are about to see the real drama in our day. John was beholding the scene that is soon to be acted out when the Raptured saints are gathered home. “And I beheld, and, lo, in the midst of the throne and of the four beasts, and in the midst of the elders, stood a Lamb as it had been slain, having seven horns and seven eyes, which are the seven Spirits of God sent forth into all the earth. And he came and took the book out of the right hand of him that sat upon the throne” (Revelation 5:6-7).
The Heavens exploded in triumphant worship. The saints will sing their first song after arriving in the Eternal City of Jerusalem. This is the Holy City of which earthly Jerusalem was but a shadow. The worship will be of Jesus Christ our Emancipator. Finally, the universe will see the full scope of who He is and the finished work of what He did. He was the first of kin, His only begotten Son, to the Father. As the Divine Savior, He is ready for the ultimate face-off with the lying masquerades of Satan.
That’s the background of the beginning process to open the “Seven Sealed scroll.” This entire document is a legal manifest, it is divine business and His saints are the offended host. Satan is the accused and judgment has been passed. Let the proceedings begin, “And I saw when the Lamb opened one of the seals, and I heard, as it were the noise of thunder, one of the four beasts saying, come and see. And I saw, and behold a white horse: and he that sat on him had a bow; and a crown was given unto him: and he went forth conquering, and to conquer” (Revelation 6:1-2).
The picture of this beginning eviction is very celestial. John sees this after being “caught up” himself while still in his body but allowed to see in the Heavenly realm. The Lamb is the Grand Marshall. The first four seals are unique and reflect a unity of purpose. Zechariah had seen the same four horses and riders, “And I turned, and lifted up mine eyes, and looked, and, behold, there came four chariots out from between two mountains; and the mountains were mountains of brass. In the first chariot were red horses; and in the second chariot black horses; And in the third chariot white horses; and in the fourth chariot grisled and bay horses” (Zechariah 6:1-3). It was noted that these go forth from God and are instrumental for judgment on the earth. In every act of redemption there is its counterpart of judgment. You can have judgment without redemption, but you can never have redemption without judgment.
The White Horse and its rider cannot represent Jesus Christ or the Antichrist. If the rider of the first horse was a noted personality, then the other riders would by necessity represent someone equal. All of the activities of these horses and horsemen are a redemptive and judgmental process right out of the seven sealed scroll. The Son of God turns these forces loose and they are going forth throughout the earth. The Antichrist is part of the action but on the defense. He cannot come out of God’s redemption plan which is recorded in this scroll. Rather, he fights to defeat the process. 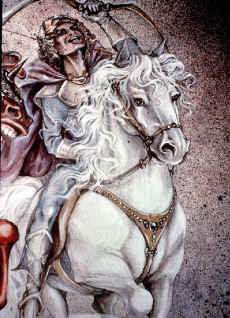 Those who see the Antichrist in connection with this White Horse are not altogether wrong. This horse and rider represent the ultimate face-off between light and darkness, truth and error, Christ in His glory, and the Antichrist in his masquerade. This action will continue for the entire seven years as will the whole process of the seven seals.
Every inch of territory taken from Satan’s forces will be hard won. It is clear that God’s uses truth and righteousness to win, not sheer power. The Lord Jesus does not seek to overwhelm Satan with His supernatural strength but with the power of His blood and the triumph of His resurrection. This is why the identity of Jesus Christ during the entire Seven Tribulation years is the “Lamb of God.”
This rider is depicted as having a bow but no arrows. There is no relationship between this weapon and the Antichrist but a powerful picture relating to the triumphant powers of a Lamb slain. It is neither the person of Jesus Christ nor the Antichrist that is connected to this Great White Stallion. It is the going forth of righteous judgment, face-to-face with every design of the fallen prince. The entire Seven Years of the Tribulation will be one conquest after another. Every realm where Satan has reigned and defiled will be conquered and purified. When the Great Tribulation is over and the saints return with Christ, we will rule a world where paradise has been restored and the principles of His holiness will fill the earth. The Book of Revelation is perfect restoration of all things. That Great White Stallion is pawing the ground to ride.
Joseph R. Chambers, DD, DSL
jrc@pawcreek.org
Posted by Abraham Israel I at 8:04 PM