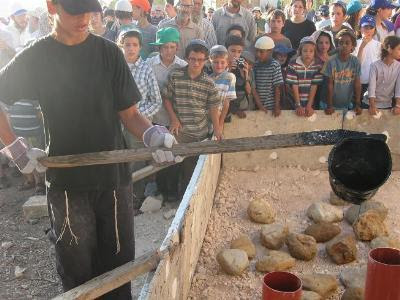 Temple Altar Construction Begins on Day of Destruction
by Yehudah Lev Kay
www.israelnationalnews.com
(IsraelNN.com) The Temple Institute began work on the sacrificial altar Thursday, Tisha B’av, the day the Second Temple was destroyed almost 2,000 years ago.
The Temple Institute has already built several of the Temple vessels such as the Ark and the menorah, and has now embarked on an ambitious project to build the altar, which will ultimately measure 3 meters wide by 3 meters long and 2 meters tall.
During Thursday’s ceremony, which took place in Mitzpe Yericho just east of Jerusalem, the Temple Institute laid the cornerstone for the altar and demonstrated how tar will be used to cement the stones together. The Institute plans on bringing the altar to its proper place on the Temple Mount when the Temple is rebuilt.
“Today, Tisha B’av, is not just a time to mourn the destruction of the Temple,” said Rabbi Yisrael Ariel, the head of the Temple Institute. “It is also a time to build.”
Rabbi Ariel thanked the more than 100 people who came to the event despite their fasting for Tisha B’Av, and despite the hot weather. The main force behind the construction of the altar, Yonaton Tzadok, was also on hand to explain why its stones were taken straight from the Dead Sea.
“The altar is supposed to represent going back to our roots, to the time of creation when everything was pure,” he said. “We took rocks from the Dead Sea, where it is likely that they were never touched by human hands.”
During the ceremony, many people who came to watch were surprised when they were invited to take part and pour tar onto the cornerstones. Rabbi Ariel first asked if there were any Kohanim (priests) in the crowd, and asked them start. When a woman requested to join in, Rabbi Ariel said "of course" and emphasized that women are commanded to build the Temple as well.
With the sun setting, Tzadok asked for volunteers to come back another day to help build the altar. “Carrying rocks and pouring tar is a lot of work,” he said. “We could use a few hundred people to help.”
More information on the Temple Institute is available at http://www.templeinstitute.org/main.htm .
Original Source: www.israelnationalnews.com