Get ready for a 'Greater Israel' dominating Mideast

On Sept. 14, 2008, Ehud Olmert, in an attempt to utter a few last words before the Israeli prime ministerial door slam shut behind him, suggested that the notion of a Greater Israel no longer exists. In a display of one-upsmanship, four days later, the apocalyptic-minded President Mahmoud Ahmadinejad of Iran declared the idea of "lesser Israel has expired too."

What do they mean by Greater or lesser Israel?

To put this all in perspective, Israel today sits on approximately 8,000 to 9,000 square Middle East miles. This makes the modern-day Jewish state comparative in size to New Jersey, which is settled on a mere 7,417 square miles of American soil.

Contrast this to almost a century ago after World War I, in 1917, when the international community had a plan called the Balfour Declaration on the negotiating table, which presented the Jewish people, who had been without a motherland for about 1,847 years, an enormous real estate proposal. This offer dedicated approximately 46,000 square miles stretching from the Mediterranean Sea eastward to the Euphrates River, which courses through modern-day Iraq and Syria.

History tells us that Lord Balfour's proposal met with staunch opposition, as the Arab leaders in the would-be affected region promptly reminded the British and French of their indebtedness to them for assisting in the defeat of the Ottoman Empire, which had ruled the Mideast roost between 1517 and 1917.

Hence in 1947, after Hitler had almost successfully nullified the need for any further Jewish state proposals, the United Nations passed resolution 181, the "Partition Plan," which downsized the scope of the Jewish state to its comparable size today. To Israeli chagrin, and nobody's surprise, this international attempt to bolster a Jewish homeland in the infamous Holy Land has met with continued Arab rejection since its inception.

No matter how lesser or greater you size Israel up, according to Bible prophecy, the Israel of today is but a mere fragment of the Jewish state of tomorrow. Genesis 15:18 informs us that 4,000 years ago the title deed to all the landmass existing between the Nile River of Egypt and the Euphrates River was bequeathed to the Hebrew patriarch Abraham. According to numerous subsequent Genesis passages, this Promised Land was later transferred through to his son, Isaac, to his grandson Jacob, and on into the hands of all their descendants, who are the Jewish people of today. 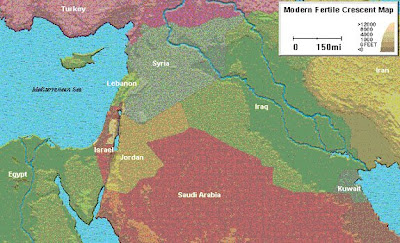 At no time in Hebrew history, did the Jewish people ever occupy the entirety of this land, causing many Bible scholars today to teach that a future time must be on the horizon whereby Abraham's descendants will stake their final claim to all of this Promised Land. Since the Arab states of Syria, Jordan, Saudi Arabia, Egypt and Lebanon presently possess most of this land, it would appear as though some major geopolitical event(s) would need to occur in the Middle East that would serve to surrender this Arab soil into Jewish sovereignty.

Complicating the end times eschatology equation further, Psalm 83 tells us that Israel is about to be involuntarily thrust into a severe regional war with these bordering Arab populations. Connecting Scriptures suggest that Israel will be victorious, exploit the spoils of war, confiscate sizeable portions of Arab territory and become one of the wealthiest nations of the world.

In my recently released book, "Isralestine, The Ancient Blueprints of the Future Middle East," I detail this coming world-changing Psalm 83 event. However, the last days' story grows further from there, and so apparently does the nation Israel along with it.

In the aftermath of the Psalm 83 Arab-Israeli war, Russia is foretold to form an alliance with a nuclear-equipped Iran and seven other sizeable world populations, and invade Israel in this forthcoming Greater condition. Due to the unprecedented powerful national relations existing between Russia and Iran today, Bible prophecy scholars like Joel Rosenberg, a best-selling Christian author, and many others are encouraging their audiences to keep their Bibles opened to Ezekiel 38 and 39, and their eyes focused on CNN and/or WorldNetDaily 24/7, as this prophetic event also appears readied to happen.

Marching beyond all of the above, the final matter presiding on the end times calendar is the so called seven-year false covenant established between Israel and the Antichrist described in Daniel 9:27 and Isaiah 28:15,18. For 60 years, since the inception of the Jewish State in 1948, most Christian scholars have taught that this instrument becomes the political pact that finally brings peace in the Middle East between the Palestinians and the Jews. The theme of this teaching has been that Israel will need protection from the Arabs specifically and worldwide anti-Semitism generally. In light of the events described above, it appears as though this theory needs to be re-evaluated.

Israel is destined for greatness and will supposedly accomplish peace militarily rather than politically. The shortsightedness of many world and church leaders today who continue to look at Israel through the limited lens of the modern-day Jewish state have drawn extremely questionable and potentially harmful conclusions. Should the above prophetic events occur as sequenced above, by the time the Beastly Antichrist of Revelation 13 arrives on the world scene, Israel will not necessarily need protection from the world; rather, the world will likely possess a genuine godly fear of a Greater Israel.

Israel is about to conquer its blood-vowed Arab enemies and in the process continue not only to possess their own advanced military weaponry, but also in addition acquire stockpiles of weapons from the defeated Arab arsenals. Then, following on the heals of the Arab-Israeli war, the Russian-Iranian consortia is supposedly going down in bitter defeat via the divine hand of the Jewish Jehovah, according to Ezekiel 39:1-6. Unless all of these above powerful prophetic claims turn out to be a figment of a fairy tale imagination, the Israel Ehud Olmert and Mahmoud Ahmadinejad spoke about in September will by no means remain in such a lesser condition.

Considering the facts that the Arab populations of Psalm 83, inclusive of their terrorist bedfellows, Hezbollah, Hamas and al-Qaida, are all presently armed and dangerous, coupled with the understanding that most of these peoples still don't even recognize Israel's right to exist, perhaps it would be wise for humanity to stop gazing through the limited lens of lesser Israel.

Failed international political attempts to accomplish a lasting Middle East peace have amounted to nothing more than grandiose hopes at brokering a non-biblically endorsed real estate deal in the Promised Land. The harder the world tries to force the Jewish state to negotiate with their ancient Arab enemies, the faster and further it finds itself in financial foreclosure.

On the nearby horizon appears to be the emergence of a GREATER Israel, and as such it could be time to substitute the microscopic view of Israel with the more expansive telescopic perspective. For all intents and purposes, the Bible predicts that Israel will possess the Promised Land, and someday soon rule the Middle East roost.

Posted by Abraham Israel I at 8:07 PM