The spirit of Anti-christ

The spirit of Anti-christ
By Abraham Israel

Most of the end time events will not be driven by human intelligence or human efforts, but it will be strongly driven by the spirit influence of the heavenlies, in executing events even up to the battle of Armageddon. This is when Christ will step in to this planet earth to save it from self-destruction. If we turn to the Bible to find the truth about the end time events, normally the first thing that people notice with their human perception is to see it with their focus on a single man who is named as “the man of lawlessness” (2 Thessalonians 2:3).
This man is called as the Anti-christ because Christ came to fulfill the Law of God through the emp 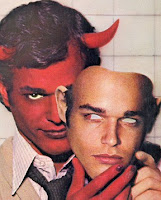 Posted by Abraham Israel I at 8:49 PM